I watched this Easter Egg-filled movie on Easter Sunday. Easter-tastic! If author Ernest Cline was looking for a resurrection of sorts, sadly, this delivered no rebirth, save, possibly for those that might have occurred in-game… er… I mean in-movie.

As you’ve probably heard, before Ready Player One was a film, it was a best-selling novel. Essentially, the book was a complete nerd-gasm of 80’s pop trivia crammed into a virtual reality escape from the painfully bleak world that the middle 21st Century will become. In fact, the VR outlet, the Oasis, is so big and broad that it boasts creative venues for all forms of electronic visitors: world-building, missions, sports, business simulations, old-school arcade ports, and quests galore. For a conceptualization of just what the Oasis is, consider taking every game you can think of, and turn it into a virtual reality program. It’s like the ultimate LARP (Live Action Role Play) but that is not really live. Considering that it is essentially paradise, and considering the bleak world that Cline describes, such a paradise is about the only place where the inhabitants of Ready Player One actually live anymore. 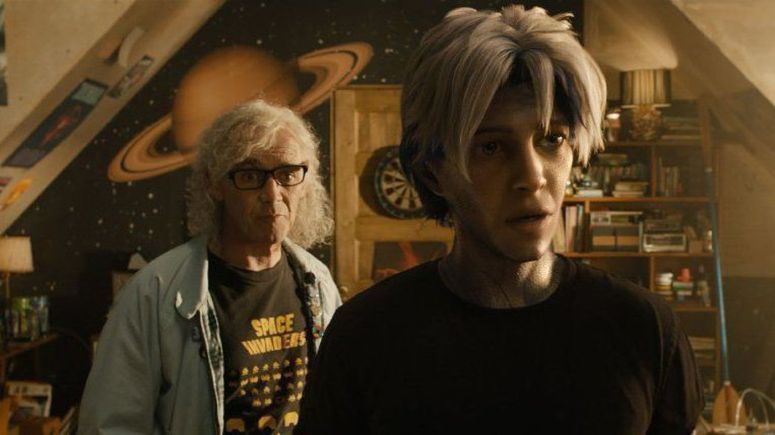 Ready Player One explores the Oasis through the trials of Wade Watts (Tye Sheridan), who is such a geek of the founder of the Oasis (James Halliday, and played by Mark Rylance) that he manages to find the first of three Easter Eggs that the founder stashes into the Oasis upon his death. The point of the Easter Eggs is that whoever finds all three will become Halliday’s heir and will take possession of the whole Oasis. What follows is a straightforward tale of free-market sharing versus corporate greed as Watts races against time and resources to find the three eggs before the evil IOI company (represented by Ben Mendelsohn as Nolan Sorrento) can find them. The hinted-at result is that IOI would turn the Oasis into a medium by which to earn even more millions of billions and everyone would receive Oasis experience as an expression of what they could afford. You know, what Net Neutrality was supposed to prevent? At its core, Ready Player One is a contrast between free sharing versus corporate greed, and all wrapped up in the gooey influence of the 80’s nostalgia.

Or, more accurately, that’s what the book is about. The movie, on the other hand, fails to deliver on any of that, save for the joy that is the nostalgia. Instead, it subverts the central message into a self-loathing contradiction about how the Real World is far better than anything that one might find in the Oasis. Certainly, if you are director Steven Spielberg, creating this movie at the tail end of the 20-Teens, that might be the case. In doing so, he moves the story out of the context of the middle 21st Century, where the slums of life are pure suckage. “The Stacks” of Columbus, Ohio, is a trailer park where trailers are literally stacked up one on the other, to produce high-rises of im-mobile homes. Junk and decay abounds, making this place more like an inhabited garbage pile than a cozy little corner of the world. Spielberg’s message essentially ignores the fact that everyone that Watts meets and interacts with in this movie, save for his aunt (played by Susan Lynch), is done so DIRECTLY BECAUSE OF THE OASIS. This utterly negates any message of such a kind, and it is for this reason that I called this movie self-loathing. Because the message that the Real World is more important than any computer generated one is told through remarkable special effects expressed through a computer system, Spielberg’s movie basically tells us to hate it – and ultimately, ourselves – for loving the things that we actually will love about it.

So what is there to love about it? Cameos galore. Oh boy, does it deliver on so many remarkable cameos that I’m not even going to tell you what all is in it. I will ogle one or two, however. The DeLorean (do I honestly need to tell you which one?) has a pretty important role throughout. A Gundam (!) makes its very first American live action appearance, and boy is it beautiful. The Holy Hand Grenade. Yes, THAT Holy Hand Grenade. Robert Zemekis is referenced in this movie galore, which is a nice nod, as Spielberg cut all references to himself and his own legacy from the film. We also get tons of killer 80’s music, tons of killer 80’s movies references (including a really freaky exploration of one of Stephen King’s greats, which, incidentally, helps to hammer home the theme of self-loathing), and video game references galore. While there are far fewer references in the movie than there were in the book (likely due to budget constraints and what they could actually get rights to), this is nonetheless a treat for fans of the times. The visual direction is an Easter basket full of gooey nougat, caramel, and tooth-rotting sweetness. It carries us into the Oasis with a good sense of just what it might be like for the various people of this world. Indeed, with the beauty and textures as rich as they are, it makes perfect sense that it would be only the Oasis that people would really come alive. And that irony is certainly not lost on this reviewer.

If you have not yet seen the movie, and do not want to be spoiled, STOP HERE. Go read Rob’s latest novel, Escape from the Spotlight, instead.

This is your last chance to avoid serious spoilers.

You have been warned.

At the end of the film, after Wade wins the competition and becomes the owner of the Oasis, he is given all the power over it. What does he do with it? He decides that in order to encourage people to get out and spend time in the real world, he shuts it down on Tuesdays and Thursdays. This is a dick move for a couple reasons. The first is that people’s schedules aren’t that cut-and dried. They have to adjust their free time to meet the demands of their work schedules. Secondly, while it seems like this would be a responsible thing to break addicts away from their platform of experience and existence, it overlooks a simple fact: people can and do actually make money through the Oasis, and an actual, viable, trading system is in place within the Oasis. In a way, this forces people to take two days off from the potential success of their jobs, and doing this might be good from Wade Watts’s perspective (as he has just inherited several trillion dollars), but certainly, this might not be ideal for a struggling nobody from a dump like the Stacks. However, the VR addict in me might just be sympathizing with other addicts who are being cut off from their fix for two whole days. I will say that the groundwork of this is kind of referenced early in the movie, when Watts talks about (and I’m paraphrasing here) how people have given up trying to fix problems and just focus on surviving them. Perhaps two days off from the Oasis could be the impetus to motivate people to start fixing the problems again.

This is a Book vs. Movie nbitpick, but it is still an important detail for anyone who has read the novel and is wondering whether or not to make the leap. In many ways, the shift in tone from “public-access vs corporate greed” to “all about the Real World connections” felt forced, almost like justification that A) everyone survives in the film (whereas some main characters bite the dust in the novel) and B) in the movie everyone comes together in one place. I understand budget limitations, but this is ridiculous. There are far too many coincidences in this regard to justify all that we are given in the film. The Oasis is a world-wide program (much like Google, and Amazon), yet to have the rest of the world dismissed for the sake of happy convenience is just too much. In the book, we don’t actually get to see Watts’ closest friends, Aech (Lena Waithe), Art3mis (Olivia Cooke), Sho (Philip Zhao), and Daito (Win Morisaki) until the very end (well… minus the one[s] who is [are] killed) , but in the film, they all miraculously appear in the same city as Wade Watts! These are the five finalists in the contest. Yet, of all the world, the whole world, which, by 2045, is probably straining from a population overload of 15 billion people,  the five finalists all happen to live in the same city? What are the odds? 15 billion people, and only people from Columbus, Ohio, could possibly figure this out?

The book handles this slightly better. The Sho and Daito characters are actually from different parts of the world, a detail which makes this far more real. While the happy coincidence of Wade and Aech meeting up does happen in the book, it is a singular kind of event. But this… all five? Come on. I really wanted to just step out of the movie right then and there, and delve back into the Oasis.

Actually, that is pretty much about the size of the whole movie. Everything that happened outside of the Oasis was pretty much a waste of viewer time. Yet, the moment we stepped into the Oasis, I found myself enjoying myself immensely. But then again, the message of this movie is that we need to spend our time in the bleaker Real World. Implied in it is that we should hate ourselves for enjoying our time in the Oasis. Guess that means I’ll be hating myself. Thanks Spielberg, for giving me some fire for the self-loathing. I miss the good old days, like in Schindler’s List, where the only guilt I felt was vicarious.

Despite the annoyingly self-condemning message in this film, I will say that there are enough Easter Eggs in the Oasis to warrant a second watching. So who knows? Maybe this really will result in a second-coming, after all. However, I think I’ll only come again if the Blue-Ray has bonus features galore, and that there is actually a segment called “The Elusive Easter Eggs.” Now that I think about it, they’ll probably give it to us as an Easter Egg that you have to find through a whole lot of trial and error. Guess we’ll just have to wait and see.

The Queen has spoken.