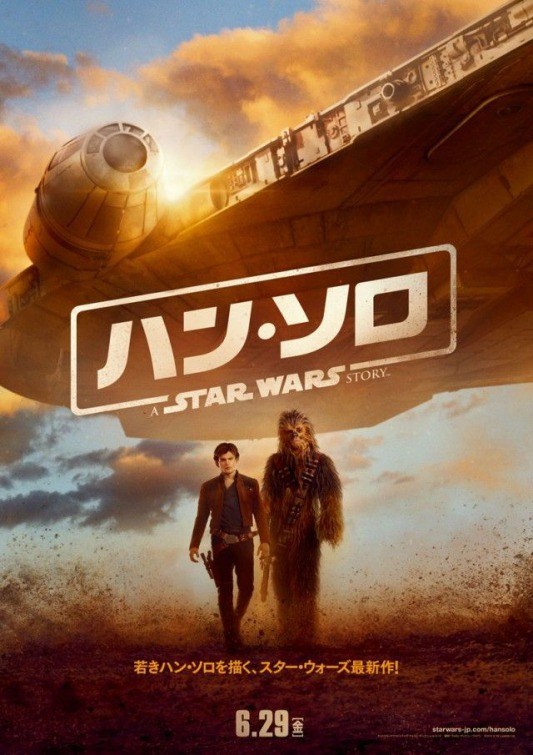 We all know the name Han Solo. We know the smirk and the bold, brash attitude. We chuckle when the words “Who’s scruffy-looking?” sound in our heads, and thrill to the devil-may-care attitude that he carried into the carbon freeze chamber. Having been with us for the past forty years, it would be a hard task to find someone unfamiliar with the space smuggler with a heart of gold. This past week, Disney released the fourth installment of their Star Wars universe, Solo: A Star Wars Story, to remind us of everything that we already knew and loved about him. It gave us his swagger, his grin, his devil-may-care attitude, his best chum, Chewbacca, and ultimately, it was completely unnecessary. 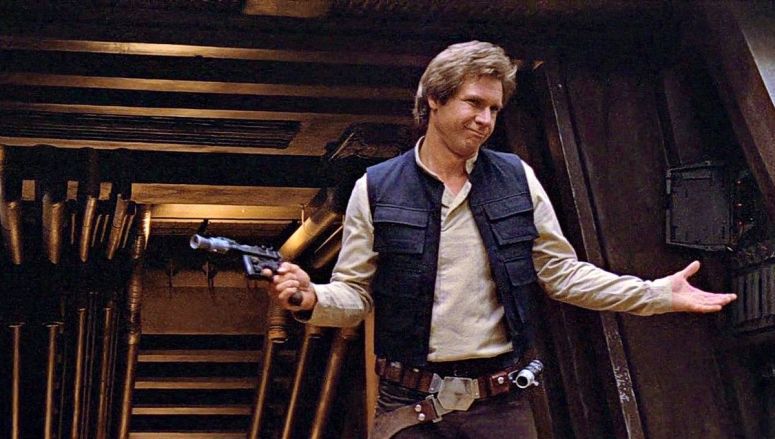 If one watches the original trilogy (Star Wars IV, V, and VI), we get pretty much everything we need to know about Han Solo: he comes from the planet Corellia, he is a pilot, a gambler, a smuggler, and hates being told the odds. He has a giant of a co-pilot in Chewbacca, who was once a slave. Most importantly Han won his space ship, the Millennium Falcon, from a guy named Lando Calrissian in a game of sabbac. If you know all this already, then you probably know everything that you need to know about Solo. Indeed, Solo doesn’t actually add anything to Han Solo’s story. The movie starts out with him on Corellia, takes him through his aborted attempt to become an Imperial pilot, brings him into contact with Chewbacca, carries him through the Kessel Run, and finally sees him off with his ship. I have refrained for giving spoiler warnings because this movie literally tells how all of these things came to be.

I needed you to know that going in to this review, because if you’re not a fan of seeing the details behind the story, then you’re going to utterly hate this film. I – on the other hand – have no problems going back to see just how the present was forged from the fires of the past. As such, I was able to go into this film and enjoy it for what it should have been: a fun romp.

Nobody can do Harrison Ford like Harrison Ford, but Alden Ehrenreich does manage a passable version of Han Solo. He’s got the swagger, the charm, and the attitude, even if he lacks the smile, the smirk, and the gravitas that Ford brought to the character. When all is said and done, he doesn’t disappoint; at least, not if we weren’t expecting him to be a carbon(ite) clone of Ford. 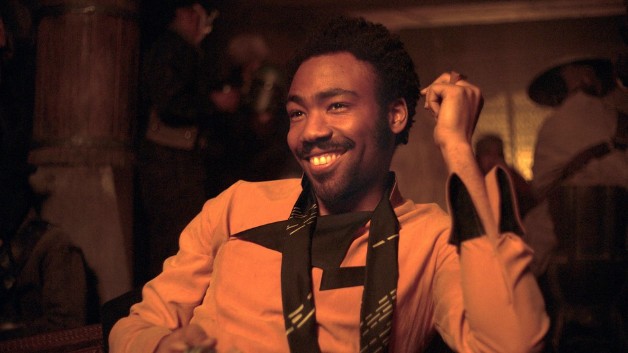 Which, oddly, Donald Glover manages to do with Lando Calrissian. At times in Solo, I could have sworn that it was not Glover speaking, but rather, it was Billy Dee Williams. The inflection and intonation were so on point that I had to keep pinching myself to remind myself where I was. Glover’s Calrissian dripped charm, style and a very different kind of swagger that Solo had; it was exactly the same kind of swagger that Williams brought to the set in the early 80s. Indeed, just about every scene that Glover had in Solo was overshadowed by his remarkable portrayal of the gambler. I thoroughly enjoyed his arc and his presence, and he brought a whole lot of fun to the overarching story.

One of the biggest problems that I’ve always had with the Star Wars franchise is how much Chewbacca is relegated simply to the role of side-kick. While we do see Chewie in this role in Solo, we also see a whole lot more from him. Played by Joonas Suotamo, the towering Wookie gets a much wider role. He goes from prisoner to liberator, to partner, and all the while, plays along with Solo’s schemes with a cautionary mind and a tongue-in-cheek attitude. The choices he makes along the ride are actually very deliberate, and his decisions to stay with Han are rooted in the wisdom of this furry alien. He is wise. He is knowledgeable. And most importantly, his reasons for sticking it out with Solo are shown. For the first time in a Star Wars film, Chewbacca is a man with his own mind – far more than just the wise-cracking partner and much more like a character rooted in his own fate. It is said that each person is the hero of his or her own story, and we finally feel like Chewie is his own person.

The rest of the cast: Qi’ra (Emilia Clarke), Beckett (Woody Harrelson), Val (Thandie Newton), L3-37 (Phoebe Waller-Bridge), Rio Durant (Jon Favreau), and villains Dryden Vos (Paul Bettany), and Enfys Nest (Erin Kellyman) are colorful and add some nice background characters so that Solo isn’t just a story about our three heroes. Ultimately, however, they are all completely forgettable. Each one comes across as a foil or a love interest, and despite the obvious fun that the actors have in playing them (especially Waller-Bridge and Bettany, whose Vos is quite scary), they are only there to further the plot. Simply put, audiences are left shrugging them off. They don’t last to Episode IV, so why bother paying them any mind?

To answer this question, I have to put up a very large SPOILER WARNING.

Really, this is your SPOILER WARNING. If you have not seen this movie, then stop reading now.

The question above is where this movie takes the fun and joy of Han Solo’s background and pisses it all away.

See, this movie really isn’t about Han Solo at all.

Instead, it’s a coincidental tale that happens to coincide with the rise in power of a young woman named Qi’ra. If I’m a betting man, I would bet my life on the fact that what looked like a standalone (solo, if you will) film is really the start of a brand new trilogy following the rise in power and Sith skill of Qi’ra, a woman destined to one day become mother to a young woman named Rey.

Alright, I don’t actually believe that last part – that Qi’ra is Rey’s mother, but I stand by the rest of my prediction.

The writing is on the wall. Throughout the film, people allude to how much Qi’ra has changed since Han and she were street rats on Correllia. This is demonstrated by how she betrays Han to her boss, Vos, and again, when she reveals her double-cross of the latter. Once Vos is a cold, lifeless husk, she supplants him as the leader of the Crimson Dawn gangsters. Then, when all is done, she contacts Vos’s boss, Darth Maul (again played by the talented acrobat Ray Park). You do remember him, right? The guy that was bisected by Qwi-Gon Jinn in Episode I?

This is the problem I have with this film. Han Solo’s story is complete. This movie told us everything we need to know about him. It gives us nothing new at all, and instead leaves us with this heartless introduction to some woman that we don’t care about with a direct allusion to a supposedly-dead Sith apprentice. From this, audiences are supposed to research Maul’s survival (and ultimately, his death) in the Star Wars: Rebels cartoon. Failing that, they will at least be intrigued enough by Maul’s return to want to pay money to see how Qi’ra avoids falling into the throes of the Dark Side and overcome her past to become a force for the Light Side. Maybe it will actually show Qi’ra taking over after Maul’s eventual death in Rebels. To be honest, I couldn’t care less one way or another.

The problem with this is that they wrapped this senseless yearning for a sequel in a very standalone story that was well done, but ultimately highly unnecessary. At least Rogue One pretty much told us that it was a standalone. It introduced us to a cast of characters and said “Thanks for the ride! Let’s kill them all off just so you have no worries about whether or not this we might want to milk this for more money.” Solo doesn’t do us that service. Instead, they provide us with this cold and cynical tease that feels far more to have come from a DC picture and not one from a (coincidentally Disney-owned) Marvel movie.

If we look at fan reactions to Disney’s Star Wars franchise, I think that we could probably agree that it has been hit-and-miss at best. If we take a look at the Internet Movie Database (imdb.com), we can see the following overall rating of the first three movies: Star Wars VII: The Force Awakens (https://www.imdb.com/title/tt2488496/?ref_=tt_rec_tt) , Star Wars: Rogue One, and Star Wars VIII: The Last Jedi. (https://www.imdb.com/title/tt2527336/?ref_=tt_rec_tt ). TFA got highest, with an 8.0; Rogue One stayed close to that with a 7.8, and Last Jedi dropped the ball slightly more with an average of 7.3. The numbers, by themselves, look pretty decent, and even the lowest-scored of these three movies (The Last Jedi) has scored a rating that is comparable to John Wick, Ant-Man, Split, Face/Off, Willow, and Spider-Man (The first Sam Raimi movie from 2002). Comparatively speaking, the worst of these Disney Star Wars films is doing at least as well as a number of big hitters and a spattering of cult classics. If that is the case, how could I possibly justify my statement that it has been hit-and-miss?

Well, the answer lies in the numbers. It may just be franchise fatigue, but the numbers are deteriorating. While TFA is generally pretty positively regarded, Last Jedi is nothing if not polarizing. For every person that loved it, there is at least one who utterly hates on it. Rogue One is generally liked, but it has its detractors who eagerly point out flaws in it – not least of which is in regards to how unnecessary it is to tell this story. Solo runs the same trend that Rogue One started. It might be a fun ride, but ultimately, it’s pointless. At least, it is insofar as being its own story. If we’re talking about the brand new story piggybacking onto it, then I can’t help but think of a tapeworm: a parasite lingering inside a creature, supplanting all the good, and poisoning it from within.

While I enjoyed Solo (indeed, far more than I was expecting), I can’t help but feel that Disney is a tapeworm inside the franchise, polluting something that people once loved, and in the process, creating a cynical work that sucks out all the nutrition of this universe and leaves us starving on the worthless remains.

All images TM and C The Walt Disney Company

The Queen has spoken.

One thought on “Movie Review – Solo: A Star Wars Movie”